In order to transport and trade goods, better move armies across their territories, and carry messages between population centers, the Incas built an extensive road network across the empire. This system became one of the most extraordinary feats of engineering in the world and helped transform the Incas into the largest empire in South America. In fact,  it was a physical symbol of power and imperial control.

In Explorandes we like yo to learn more about the history, characteristics and legacy of the Qhapaq Ñan, the Great Inca Road, before you go through it.

Although the true extent of the road network is not completely known, different investigations calculate it covered over 40,000 km. It had two main highways running north to south across the Inca Empire, which eventually spread over ancient Ecuador, Peru, Bolivia, Chile and Argentina.

One highway ran down the coast from northern province of Tumbes, Peru, to the modern city of Santiago, Chile in the south. The eastern route would ran through the highlands and mountain valleys from Quito, Ecuador to Mendoza, Argentina.

Across plains, deserts, and mountains passes up to 5,000 metres, the the Great Inca Road connected settlements, administrative centers, agricultural and mining zones as well as ceremonial centres and sacred spaces.

Some roads were also built outside Inca controlled territory, perhaps to facilitate trade with neighbouring peoples. 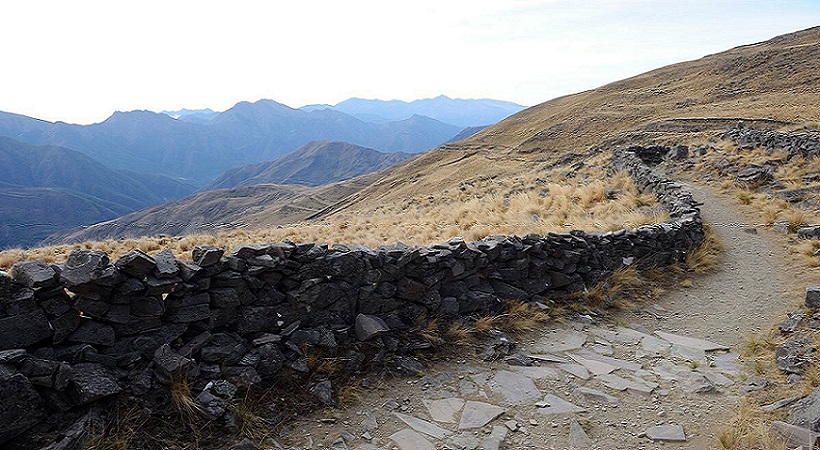 The first routes were built by Wari, Tiwanaku, and Chimu cultures centuries earlier. When Incas arrived, they not olny claimed exclusive right over numerous traditional routes, but also built lots of new sections or upgraded them substantially.

Incredibly, the Inca road system was constructed entirely by hand, without the benefit of sophisticated surveying equipment and using only local materials: wooden, stone, and bronze tools.

Incas worked with the landscape and paid strong attention to local conditions. On steep terrain they built steps to dissipate the water’s energy and counter erosion. At high altitudes they paved the way with local stone to protect the surface from ice and snowmelt, and in desert areas near the coast they built low walls to keep the sand from drifting over the road.

That’s whay every year water destroys many modern roads, but the Inca roads tend to stay.

Definetly, the best known portion of the road system is the Inca Trail to Machu Picchu. Large stone stairways and bridges give access to the site for modern tourists. Settlements, tunnels, and many Incan ruins are located along the trail before ending at the Sun Gate on Machu Picchu mountain.

If you want to walk through this ancient road and visit Macchu Picchu, then the Inca Trail trek is for you. To learn more about the trip and our service, please contact us.