Arequipa is the third most visited destination in Peru. However, it is not only characterized by its great landscapes, monuments, and hot springs. Thanks to the great cultural diversity that exists in Peru, Arequipa has a variety of typical local dishes. These dishes alone are a great reason to make a trip to Arequipa. Some of these dishes are:

Chupe de Camarones is a highlight of the the region of Arequipa consumed by tourists usually after touring the volcanoes. It is called chupe, or stew, for the large number of ingredients used in preparing this typical Creole dish. The shrimp, a central ingredient, are common to Arequipa. The other ingredients include proteins, tubers, mantras, and cereals. 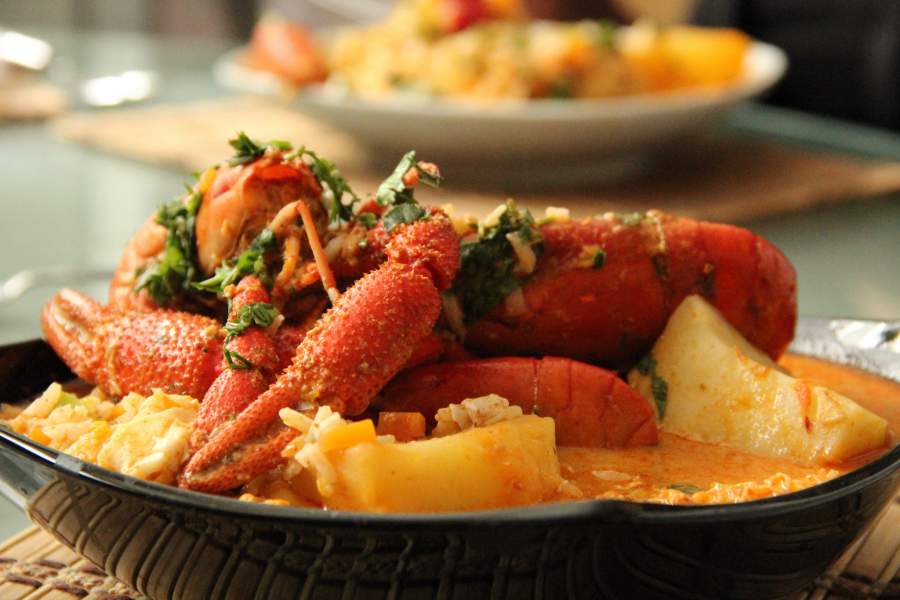 Rocoto Relleno is a dish based on the rocoto, a pepper with similar characteristics to the chili but the size of an apple. The rocoto is stuffed with ground beef, olive, peas, and garnished with spices like cumin and parsley. The dish is baked and served hot aside a baked potato. Rocoto Relleno is the most representative dish of Arequipa and one of the best known in Peru, as the rocoto is one of Peru’s exports.

Solterito is a very typical dish of the region and usually accompanies most meals. It’s composed of a salad of cooked beans, onion, tomato, cheese, potatoes, corn, olives, rocoto, chopped parsley, and finished off with olive oil and vinegar.

Adobo Arequipeño is a pork marinated in spices and vegetables that is then cooked in a clay pot with chicha de jora Arequipeña until the meat becomes tender.
Ocopa Arequipeña

One of the most typical dishes of Arequipa, ocopa Arequipeña is a spicy and creamy sauce made from dried mirasol peppers, onions, and garlic. It is usually served with parboiled potatoes and decorated with hard-boiled eggs and olives. It is a very popular dish with tourists and residents of Arequipa alike.

Cuy Chactado is a dish of guinea pig marinated in chili pepper sauce, salt, pepper, garlic, cumin, and oil. Once marinated, the dish stands for half an hour before being added to the frying pan with stones to ensure a nice golden color. Boiled potatoes are typically served on the side.