The Incas had as one of their main gods the sun (inti, in Quechua language). Therefore, it was important for priests to observe the sun and understand it. So, they had an astronomic clock or calendar that indicated some significant celestial periods for them. This clock was called intihuatana.

Intihuatana is derived from Quechua, and it is the combination of two words: inti, which means “sun”, and wata-, a verb meaning “to tie”. So, intiwatana is literally an instrument or place to “tie up the sun”, often expressed in English as “The Hitching Post of the Sun”.

Let’s find out more about this marvelous sundial, which you will able to see in our inka trail to Machu Picchu.

The Incas built multiples intihuatanas along their territory, but many of them were destroyed by Spaniards for been considered blasphemous. From the ones that left, the better conserved are located in the archeological sites of  Machu Picchu and Pisac. However, the most notable and famous is that of Machu Picchu, which was found intact in 1911.

Machu Picchu’s intihuatana is located at the top of a natural pyramid’s summit, whose slopes have been converted in terraces or andenes. A twisting stone ladder leads to the top of this pyramid.

The intihuatana is a monolithic structure carved in gray granite stone of the mountain top. It has 1 to 2 meters high and 2 meters of diameter. Its base does not have a defined shape but at the top stands out a upright stone column whose four sides indicate the four cardinal points: North, South, East and West. In addition, it features a granite block resembling a bench or altar where the priest would have made some type of ritual. 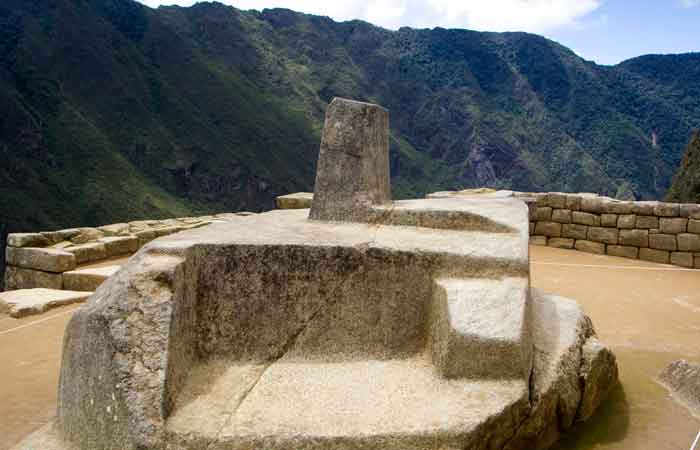 The sacred stone was used by Inca priests for astronomical observations, especially of the sun. It was aligned with the sun’s position because it has been shown to be a precise indicator of the date of the two equinoxes.

At midday on March 21st and September 21st, the sun stands almost directly above the pillar, creating no shadow at all. At this precise moment, the sun sits with all his might upon the pillar. Then, the priests symbolically tied the sun to the stone using a sacred cord in a ceremonial activity.

Explorandes offers many trekking routes to Machu Picchu, where you can see the intihuatana. If you want more information about our routes and services, please contact us.