There’s more than the mighty Amazon River flowing through Peru. In fact, Peru’s portion of the Amazon River is surpassed in length by seven other Peruvian waterways. This is good news for those of you planning a trip to Peru for the promise of some river adventure between your ancient ruins exploring and Andes mountain trekking. In this blog post, we loop you in on not only Peru’s longest rivers, but the adventures that await on each of them.

Stretching 1,100 miles (1,771 km.), the Ucayali River is the longest river in Peru. It begins in the Ucayali Region, travels northward to the port city of Pucallpa where many Amazon river cruises embark, and then follows a north-northeasterly course through the jungles of the Pacaya-Samiria National Reserve to ultimately connect with the Amazon River in the port town of Nauta. 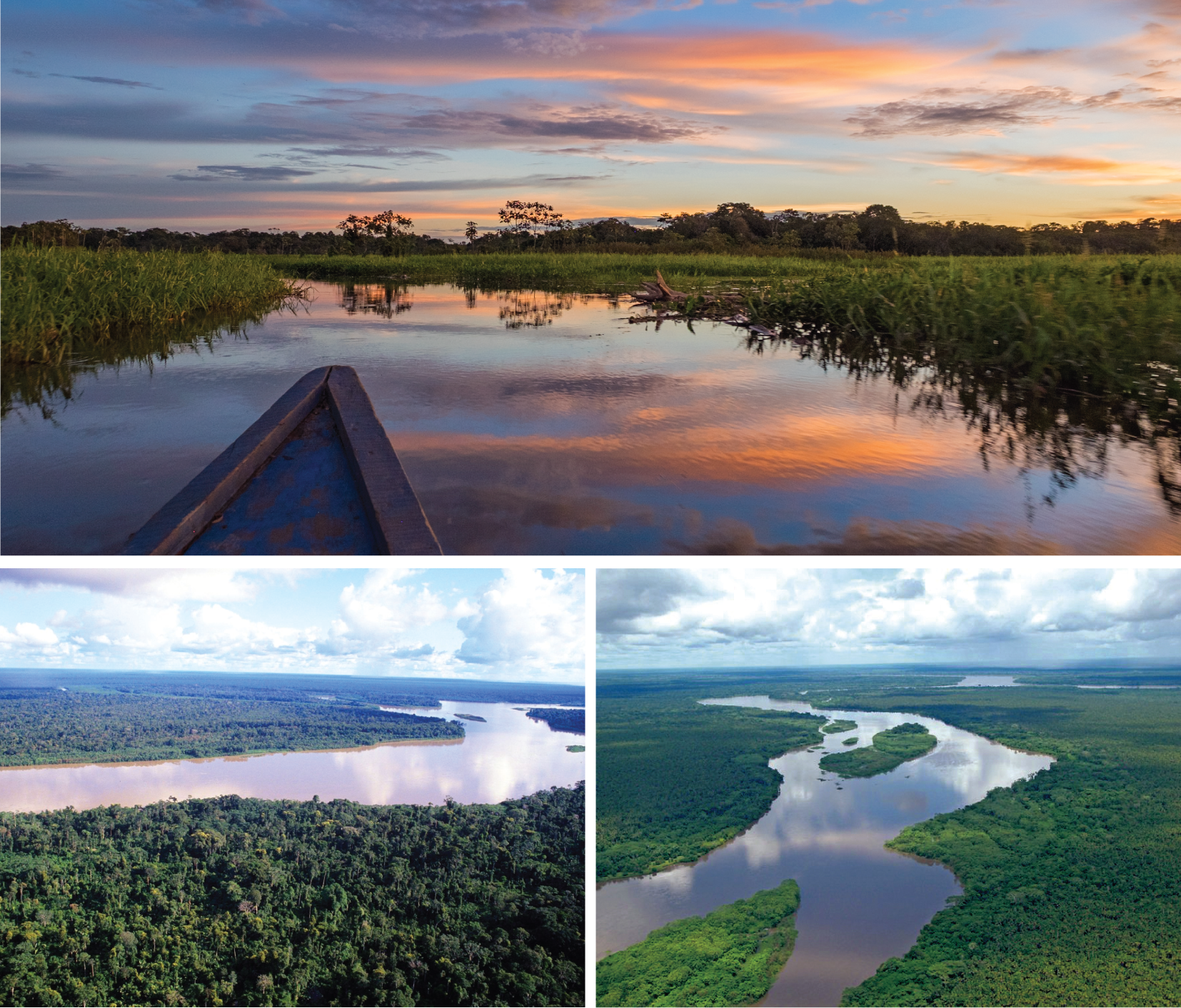 The Marañón River journeys 879 miles (1,414 km.) through the central highlands of Peru, meeting up with smaller tributaries as it makes its way to the Amazon River and its confluence with the Ucayali River in Nauta. This river has two claims to fame, the first being that it’s widely considered to be the main stem source of the Amazon River and the second being its jungle gorges, one of which is often compared to the Grand Canyon in the U.S. 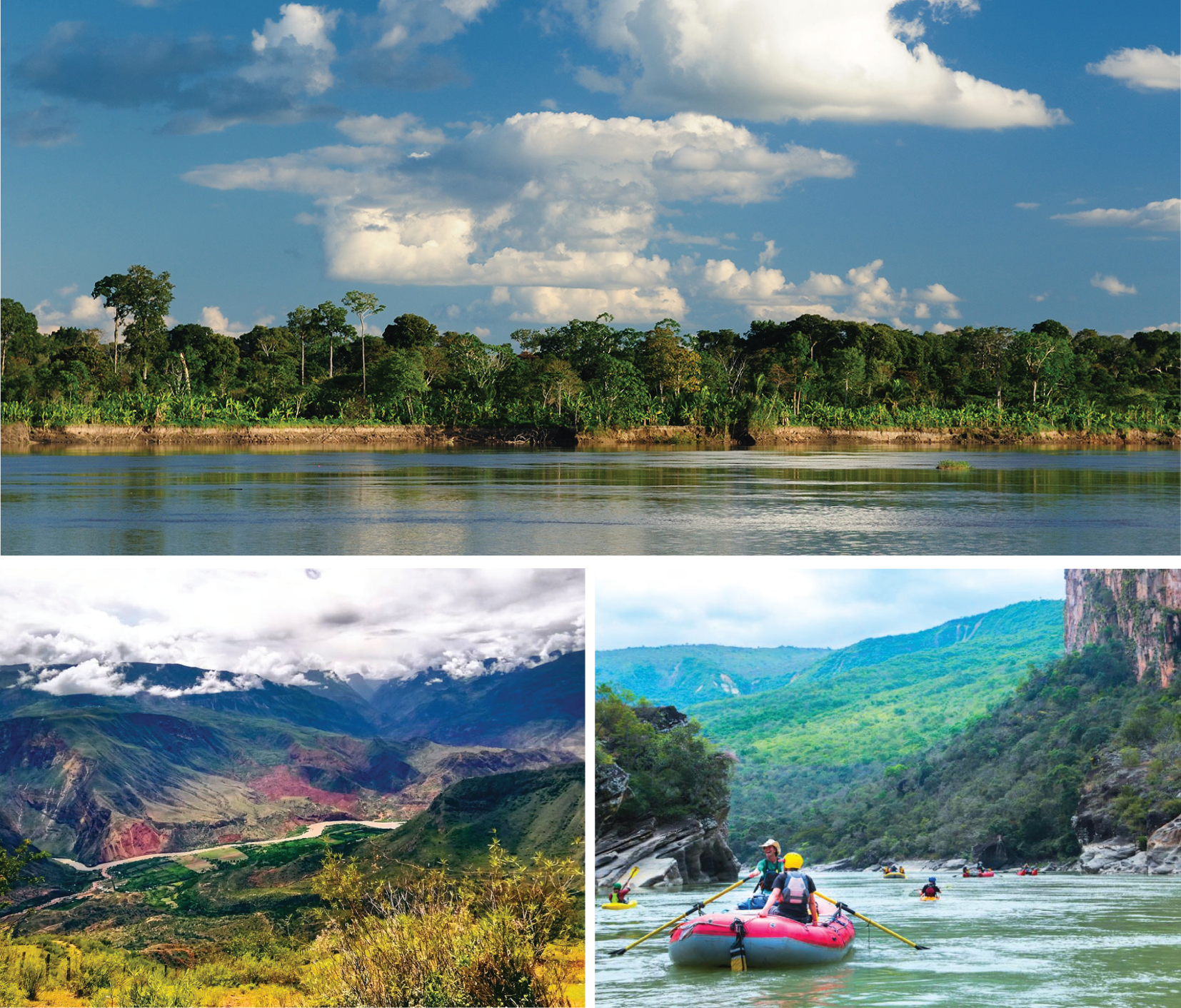 Great for transport, not so much for travelers

This four country-traversing river begins in southwestern Colombia, continues along the Colombia-Ecuador border, and then follows the Peru-Colombia border to Brazil via Tarapacá for a grand total of 857 miles (1,380 km.).  The river is mainly a transport route for cargo headed for the Amazon River in Brazil. 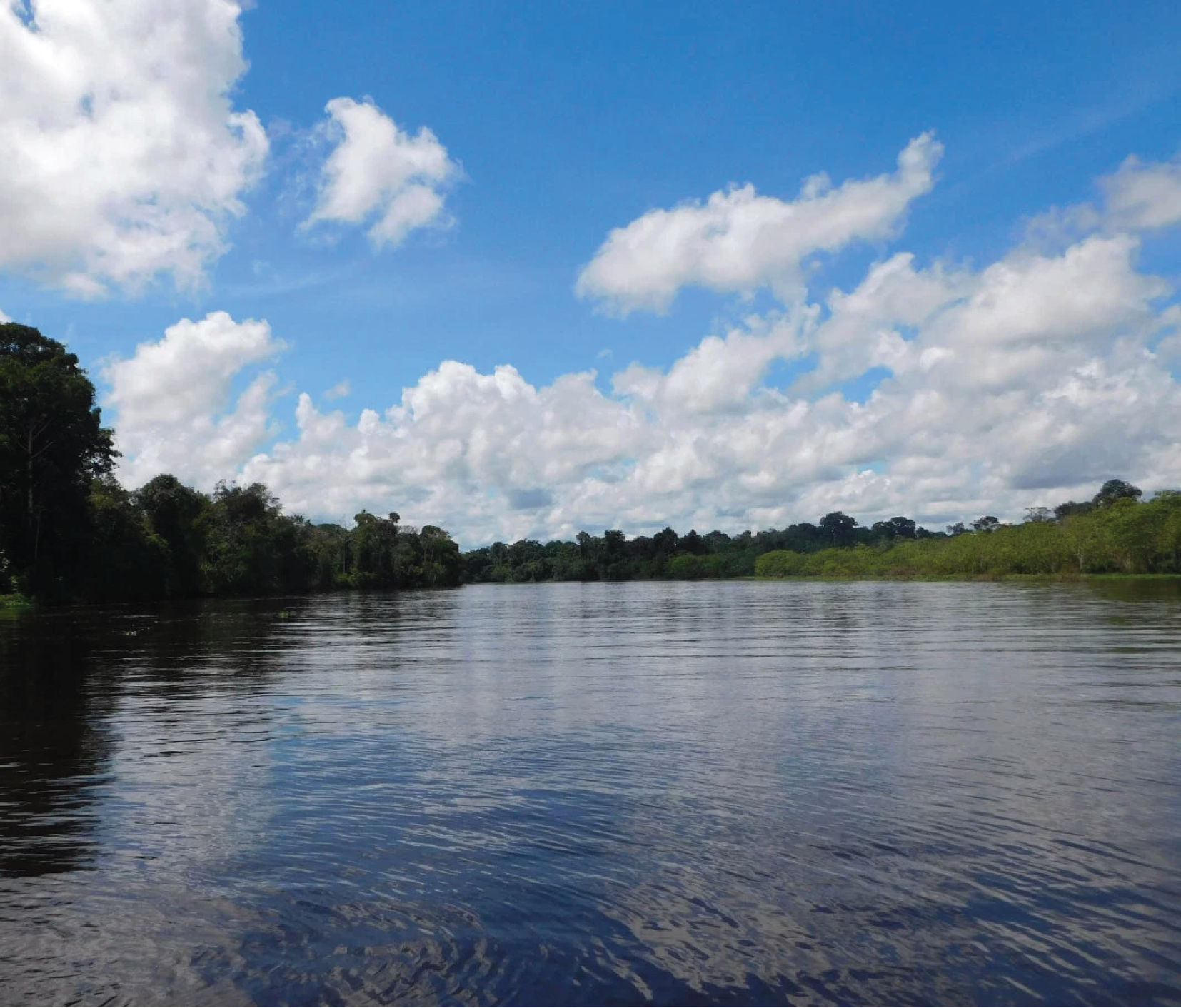 The Yavarí River hugs the boundary between Peru and Brazil for roughly 736 miles (1,184 km.), meaning it’s a jungle river that ultimately meets up with the Amazon River in the Brazilian jungle town of Benjamin Constant downstream from Iquitos. 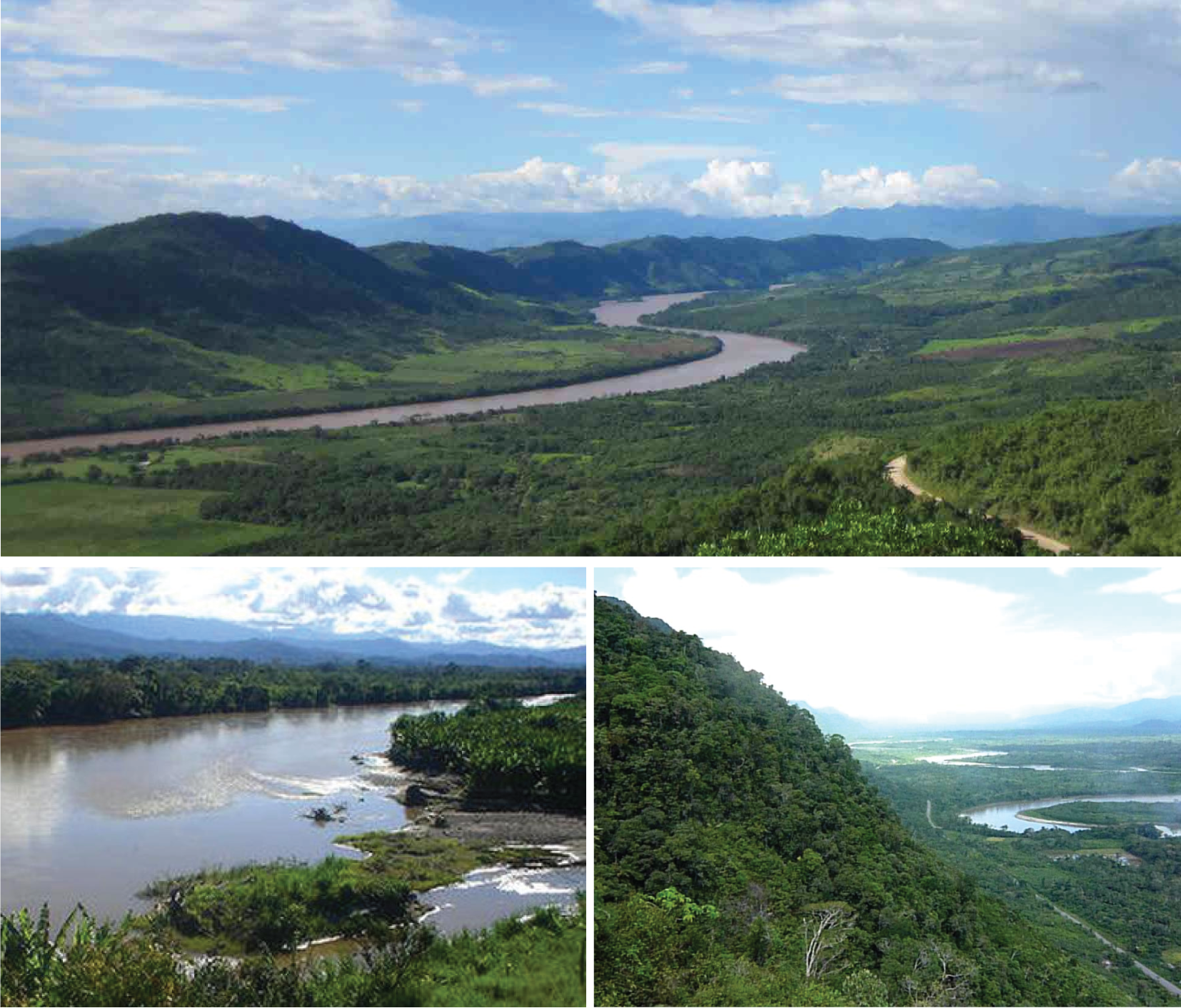 The Huallaga River, at 707 miles (1,138 km.) long, is the longest river in Peru that doesn’t empty into the Amazon River. Starting its northerly course in the central highlands of Peru in a region known as the Huánuco Region, the Huallaga River passes small and off-the-beaten-tourist-trail high jungle cities like Tingo Maria, Tocache, ​Juanjuí and Bellvista, before it connects with the Marañón River on the western fringes of the Pacaya-Samiria National Reserve. 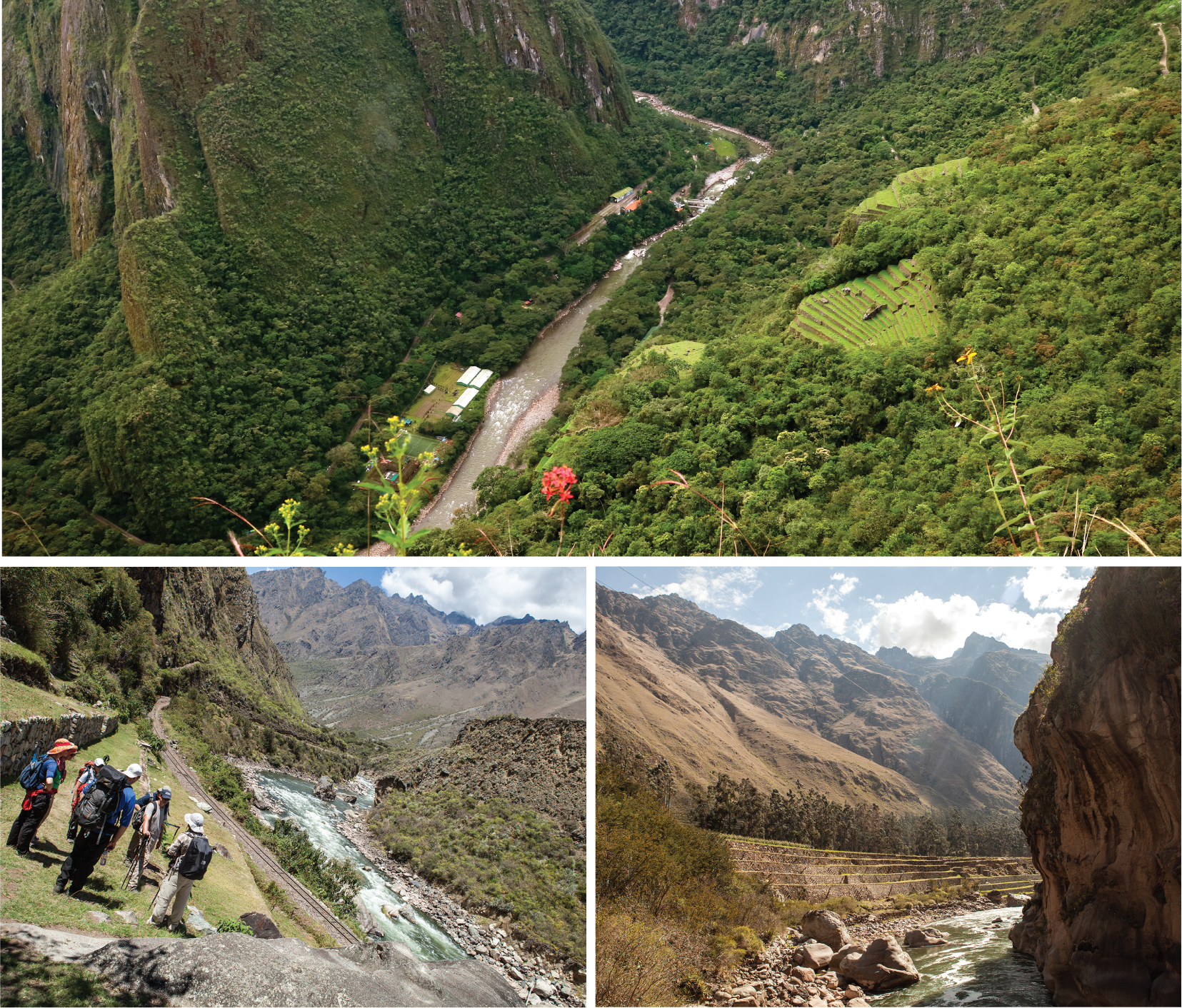 This 536-mile (862 km.) river is one that most travelers to Peru come into contact with at least once during their Peru holiday, but often more than once. The reason being that the Urubamba River snakes its way from the city of Cusco to the historic sanctuary of Machu Picchu, passing along the valley floor of the Sacred Valley of the Incas. There are touchpoints to this powerful river in popular cities like Pisac, Urubamba, Ollantaytambo, and Aguas Calientes, spots you may have on your Peru trip itinerary. 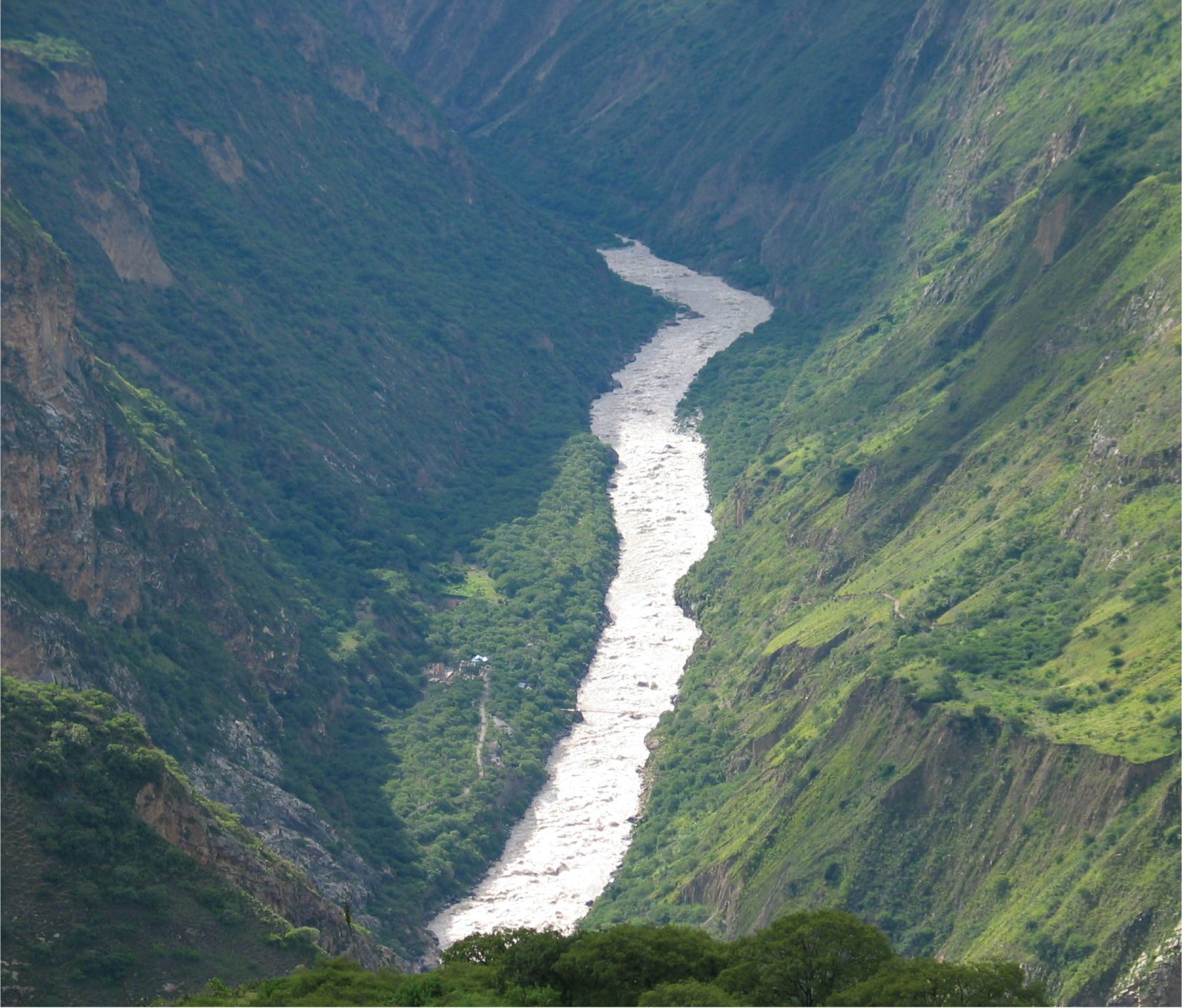 The 450-mile-long Mantaro River follows a long and complicated journey from the central highlands of Peru, near Cerro de Pasco, to the Amazon River. Though, it’s anything but a direct route. The Ene River, the Tambo River, the Ucayali River, and the Marañón River all play a part in getting the Mantaro River’s waters into the Amazon.  Hot tip: the best whitewater rafting can be found in the Izcuchaca and Tablachaca Canyon stretches of the Mantaro. 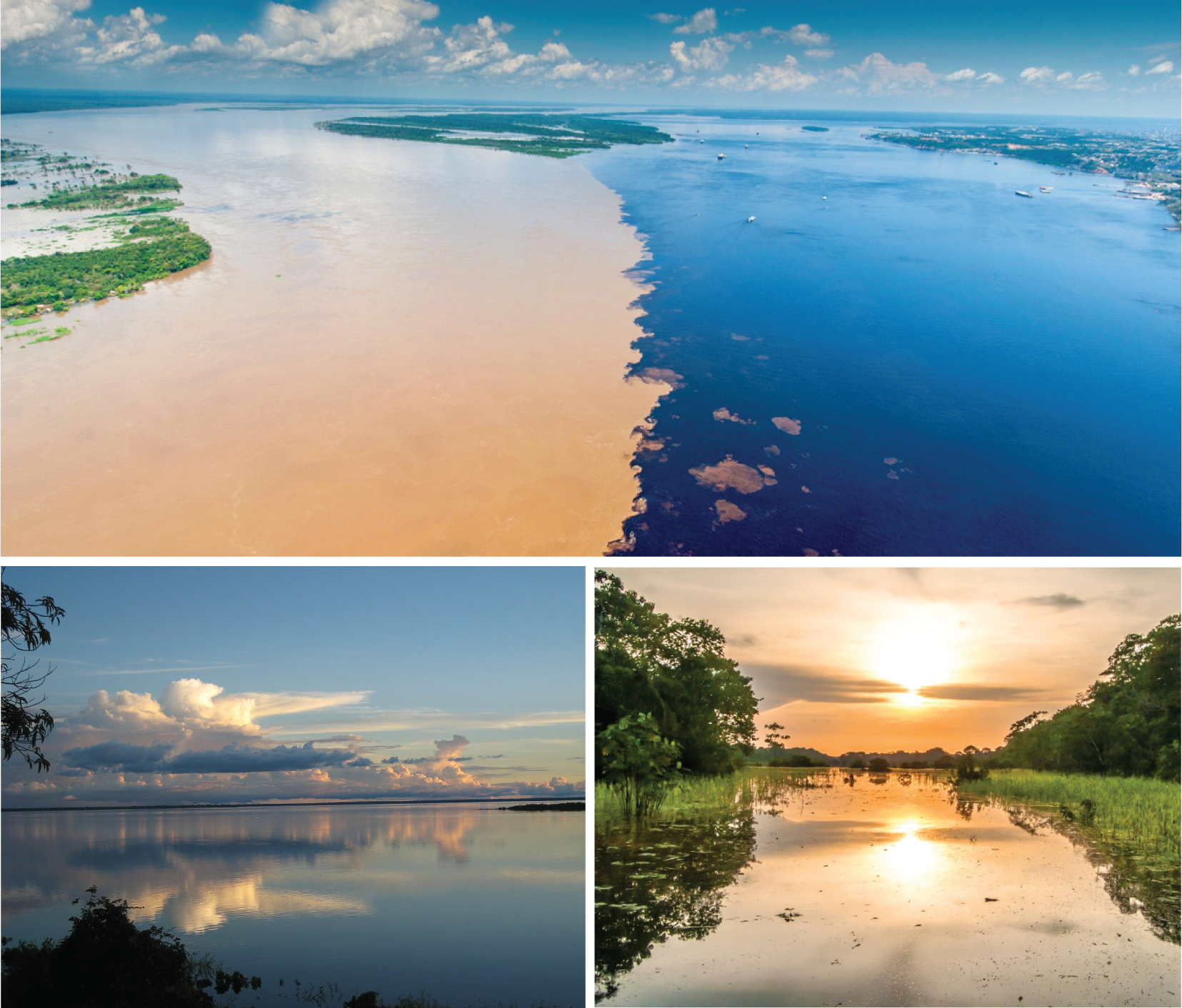 While the greater Amazon River may be the world’s second longest river after the Nile, the part that runs through Peru falls at #8 in the ranking. If it’s any consolation, however, nearly every other river that flows in Peru ultimately joins up with the Amazon River. Its origins in Peru lay at the confluence of the Ucayali and Marañón River in Nauta. It then follows a northerly course to Iquitos and then onward to Brazil. 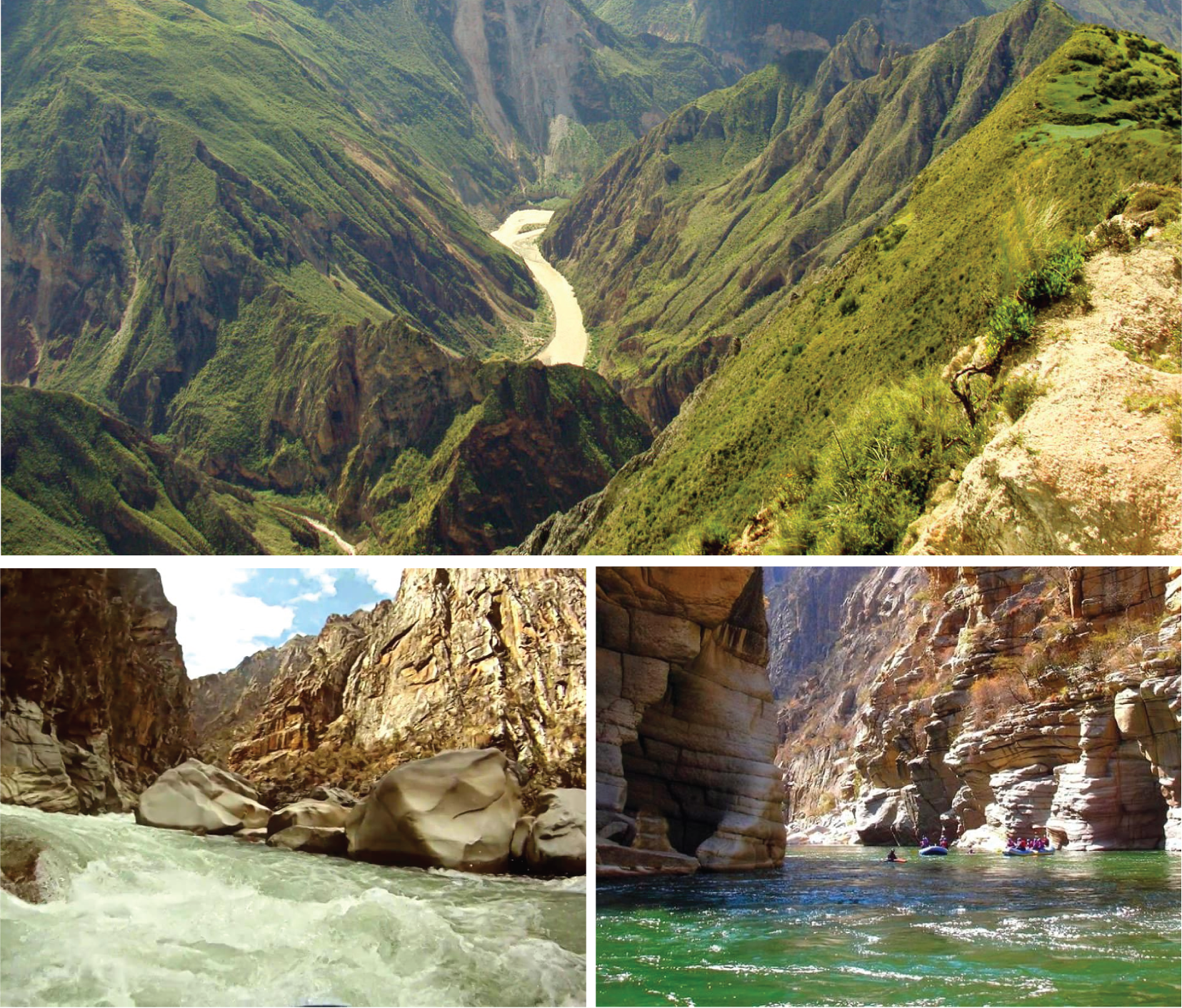 The 429-mile-long (690 km.) Apurímac River begins in the mountains of the Arequipa region and ends in the Cusco region. It’s the 18,360-foot Nevado Mismi that feeds it with a steady supply of meltwater.  If you’ll be trekking to the Choquequirao archaeological site or planning to go whitewater rafting in Cusco, you will undoubtedly find yourself interacting with this important Peruvian river. Some say the Apurímac River is the true source of the Amazon River. 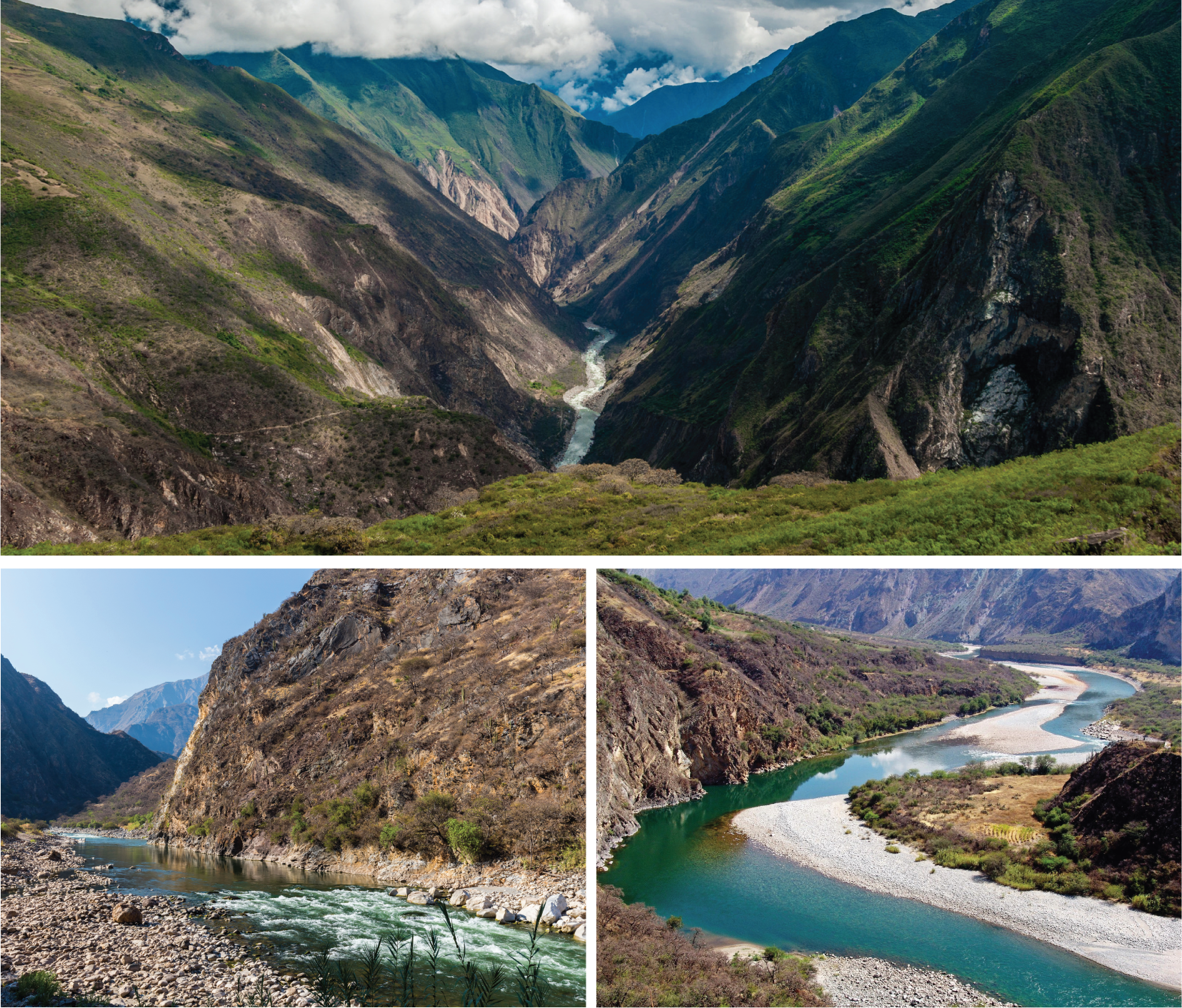 The Napo River starts in Ecuador, winds east to Peru, and then continues southeast through the dense jungles of northern Peru where it meets up with the Amazon River at a point northeast of Iquitos. The total journey? 414 miles (667 km), making it the 10th longest river in Peru and the last major Amazon River tributary before the Amazon flows into Brazil. 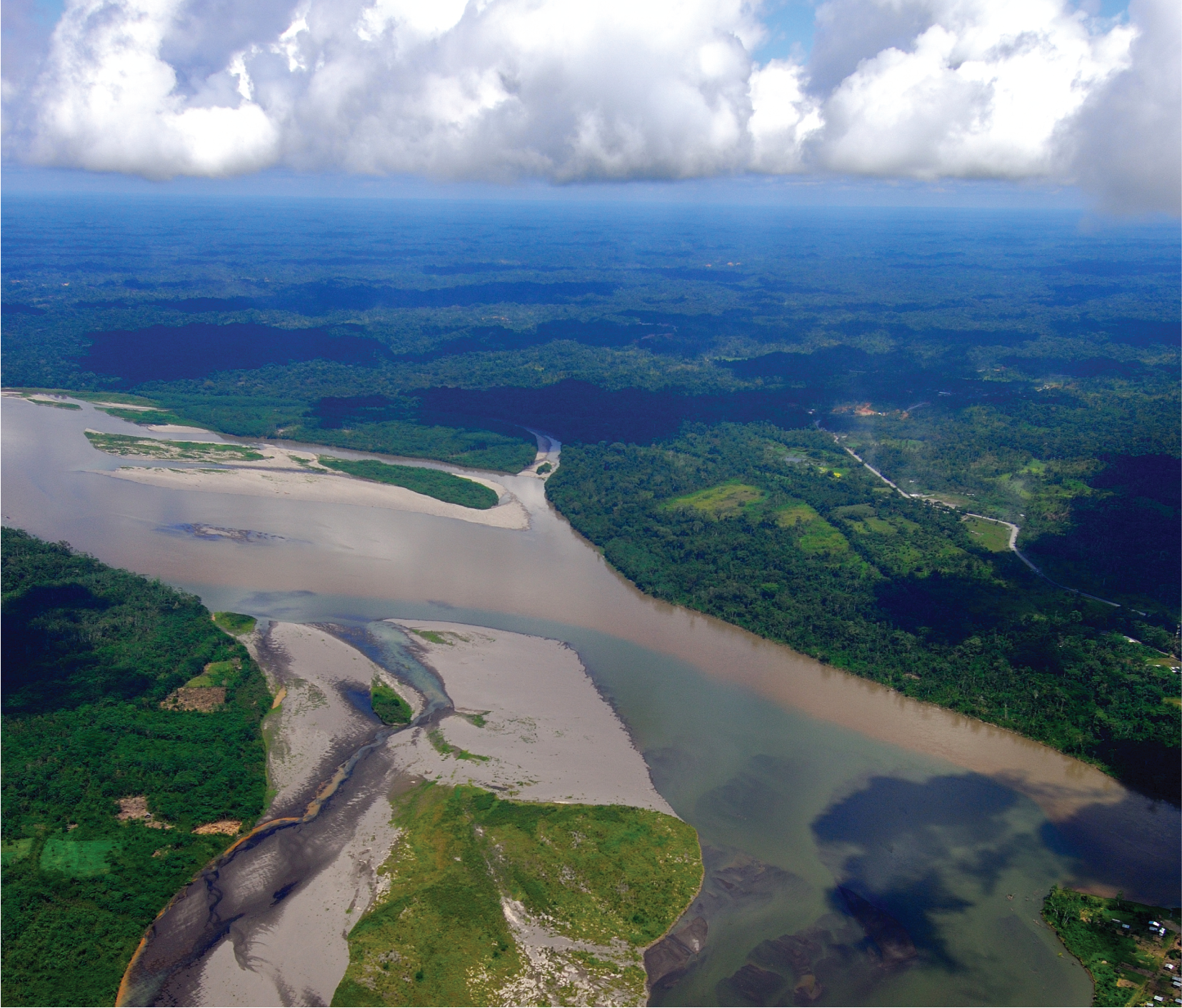