Machu Picchu is among the most-visited destinations in South America, and for good reason. Built in the mid-fifteenth century and abandoned a century later, its superb architecture amidst a natural cloud forest setting thrills over 1,000,000 tourists every year.

The fact is Peru has an abundance of ruins, some equally intriguing and less well-trafficked then Machu Picchu. This blog will provide information to help guide you in choosing fascinating archaeological sites to add to your Peru trip. Or, if you are visiting Peru for the second or third time, and seeking new adventures, the information here will assist you in choosing new places to explore during your Peru adventure.

Kuelap – these ruins are comparable to Machu Picchu in terms of sheer impressiveness. Located in the Amazonas Region, Kuelap was constructed by the Chachapoyas or “Cloud People.” It comprises over 500 pre-Inca circular stone structures that predate Machu Picchu by over six centuries! Rediscovered in 1843 by a resident of nearby Chachapoyas, the ruins consist of many round stone houses with thatched roofs and ceremonial patios with burial chambers. Some of the walls are carved with figures such as snakes and other mythological creatures. Stone aqueducts for conducting water run along the sides of the ruins. A recently built cable car system gives easier access to Kuelap than in past decades. 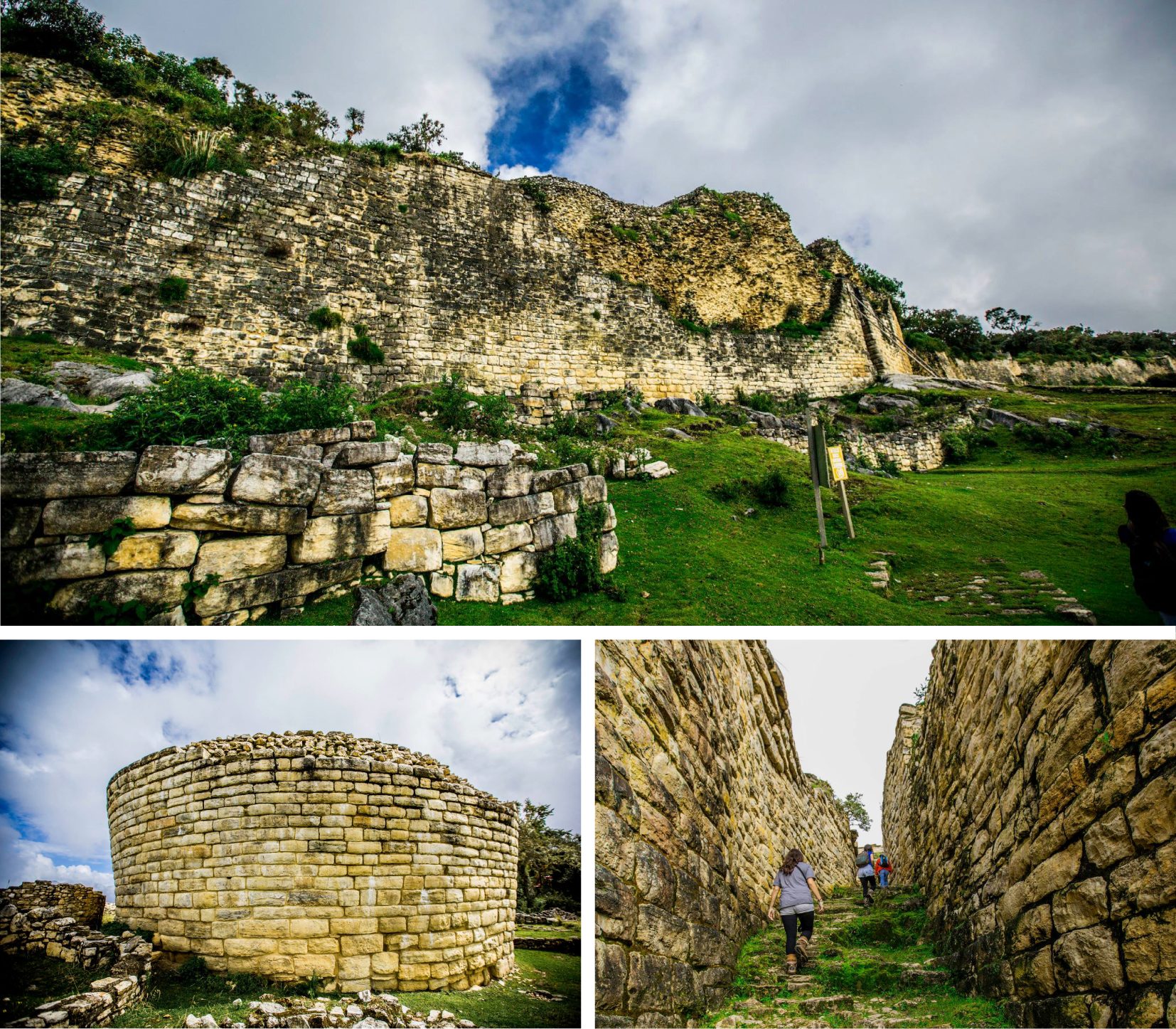 Chan Chan – Named the “largest pre-Columbian adobe city in the Americas,” Chan Chan is located near the coastal city of Trujillo, in Northern Peru. It was constructed by the ancient Chimú civilization and encompasses plazas, burial sites, and ceremonial buildings. As many as 30,000 people were thought to have occupied Chan Chan in its heyday, which was between 900 AD and 1400 AD. Many of its walls are decorated with motifs of sea animals and mythological creatures. An on-site museum displays ceramics, stone tools, and other artifacts from the Chimu culture. 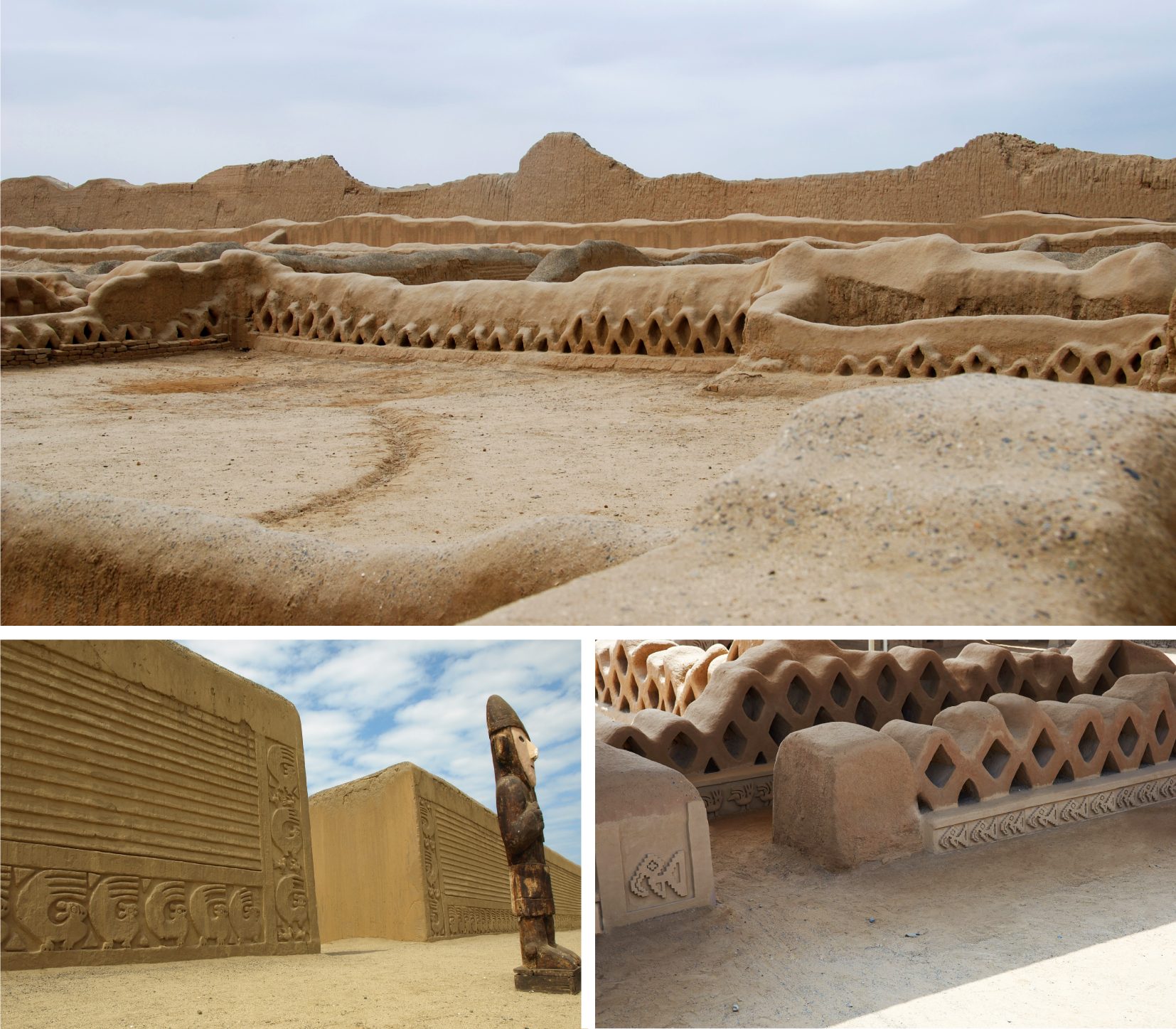 Huaca de la Luna– Over seven centuries older than Chan Chan, the Huacas, or Temples of the Moon and Sun, also located near the city of Trujillo, were built by the Moche people, and are incredibly well preserved. Although the larger structure, the Huaca del Sol is closed to visitors, The Huaca de La Luna is decorated with intact wall designs and friezes of deities, animals, and fanciful creatures, whose colors remain vibrant after many centuries! It is believed that the Huaca de la Luna was an important religious center for the Moche people, while the Huaca del Sol was an administrative center. There is an onsite museum with artifacts excavated from the site on display. 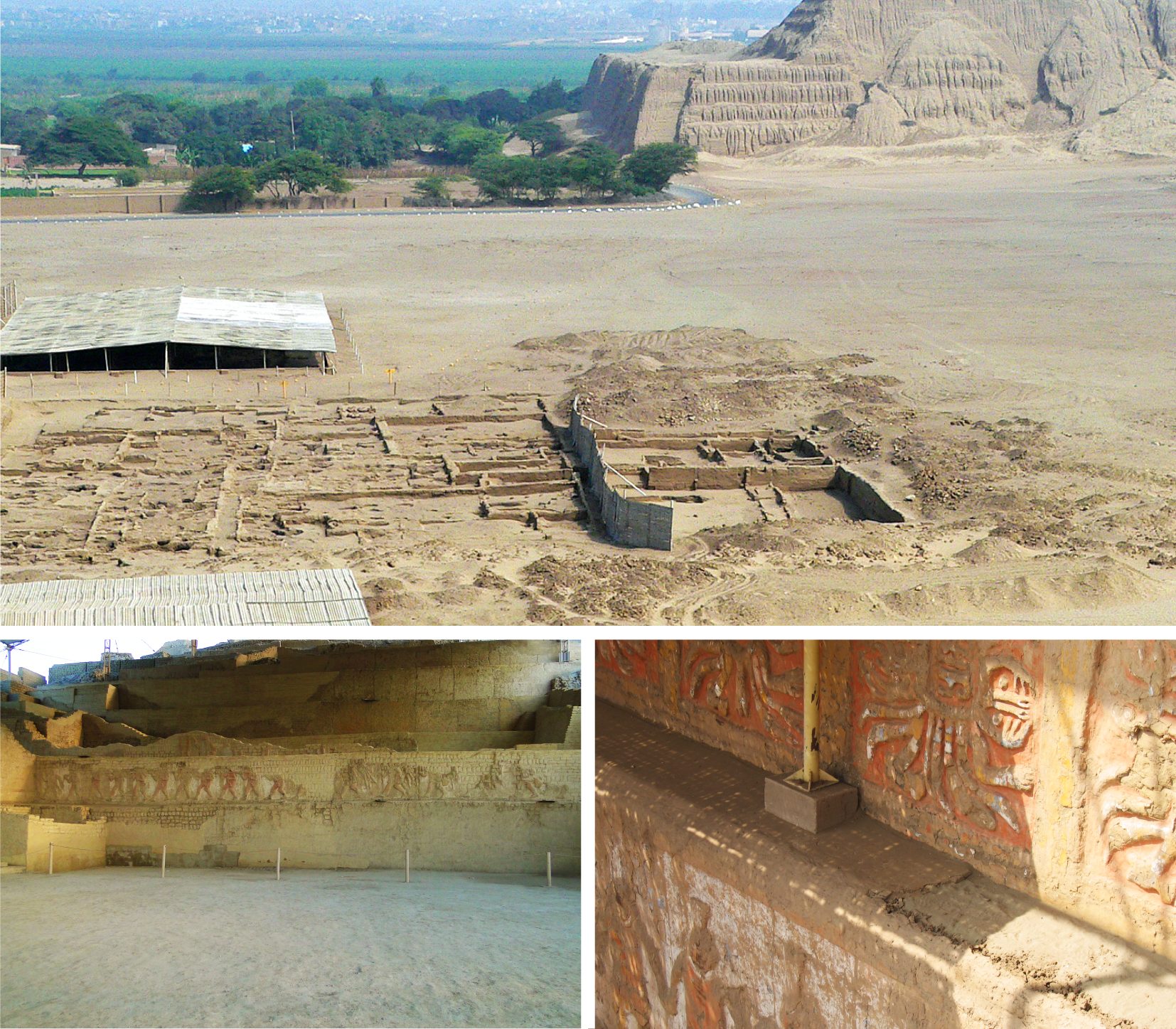 El Brujo – Located 37 miles northwest of Trujillo, the archaeological complex of El Brujo can be visited around the same time as you visit Chan Chan. This was among the most significant ceremonial sites of the Moche people. The name El Brujo, or The Sorcerer, comes from the fact that many mystical adepts spent time at this ceremonial site. There are two pyramids at this site: the enormous Cao Viejo and the Huaca Cortada. The Lady of Cao, a mummy of a woman that was found inside the Cao Viejo pyramid, is on display at the onsite museum, along with many Moche artifacts.There are also many intact murals and designs painted on the pyramids that offer a glimpse into the artistry of the Moche people. 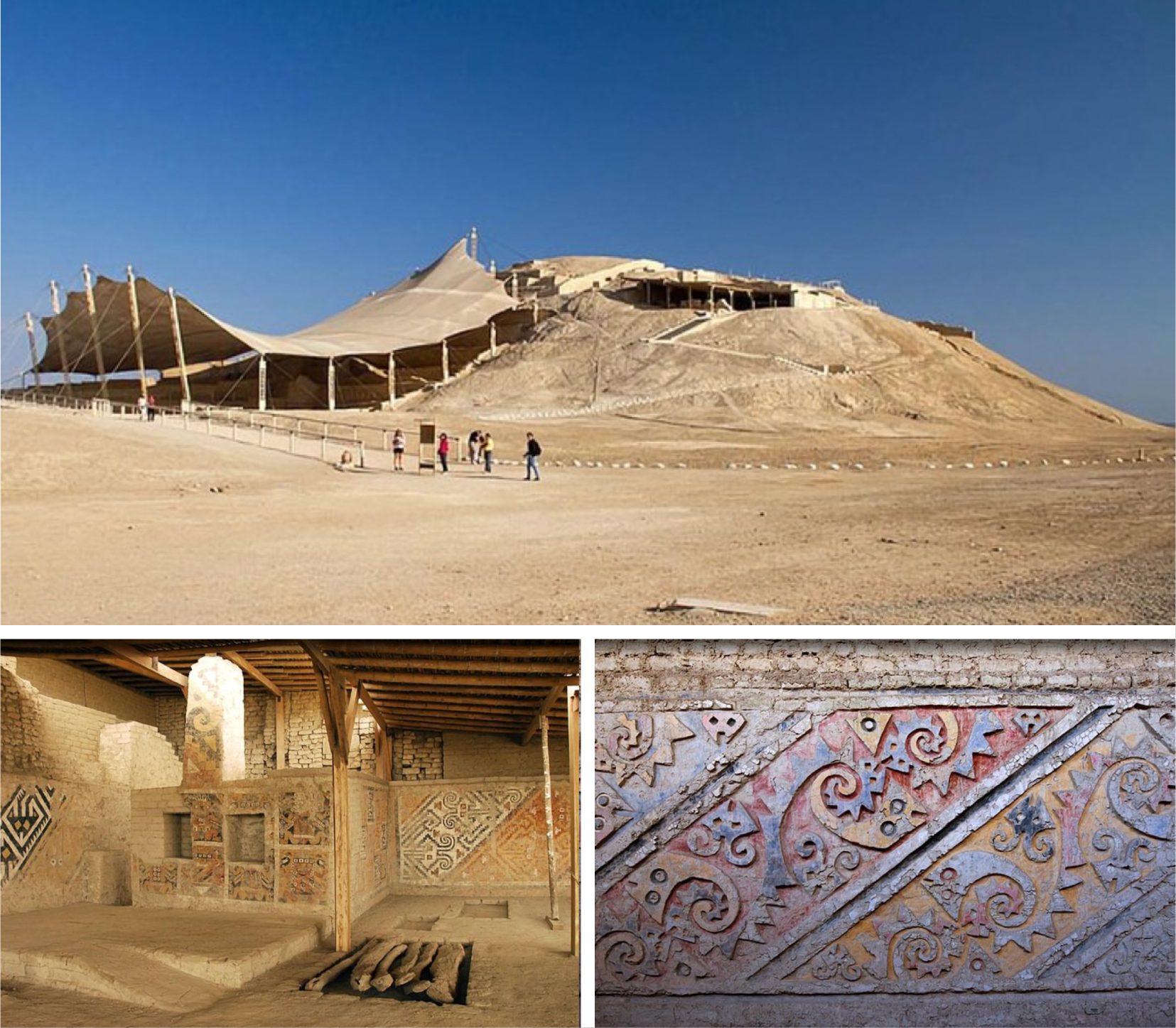 Huaca Pucllana– located right in the Miraflores district of Lima, it would be easy to include a visit to the Huaca Pucllana during your exploration of the City of Kings. The Huaca is a monumental adobe pyramid consisting of seven ascending platforms, built by the Lima Culture, which thrived between 200 and 700 AD. It consists of two sections; one comprising deep pits that were filled with skeletal remains of fish and sea creatures that had been offered to deities; the other was an administrative area. There are also many smaller structures, adobe walls, and remains of huts found on the site. A large courtyard at the site was over 500 meters in length! 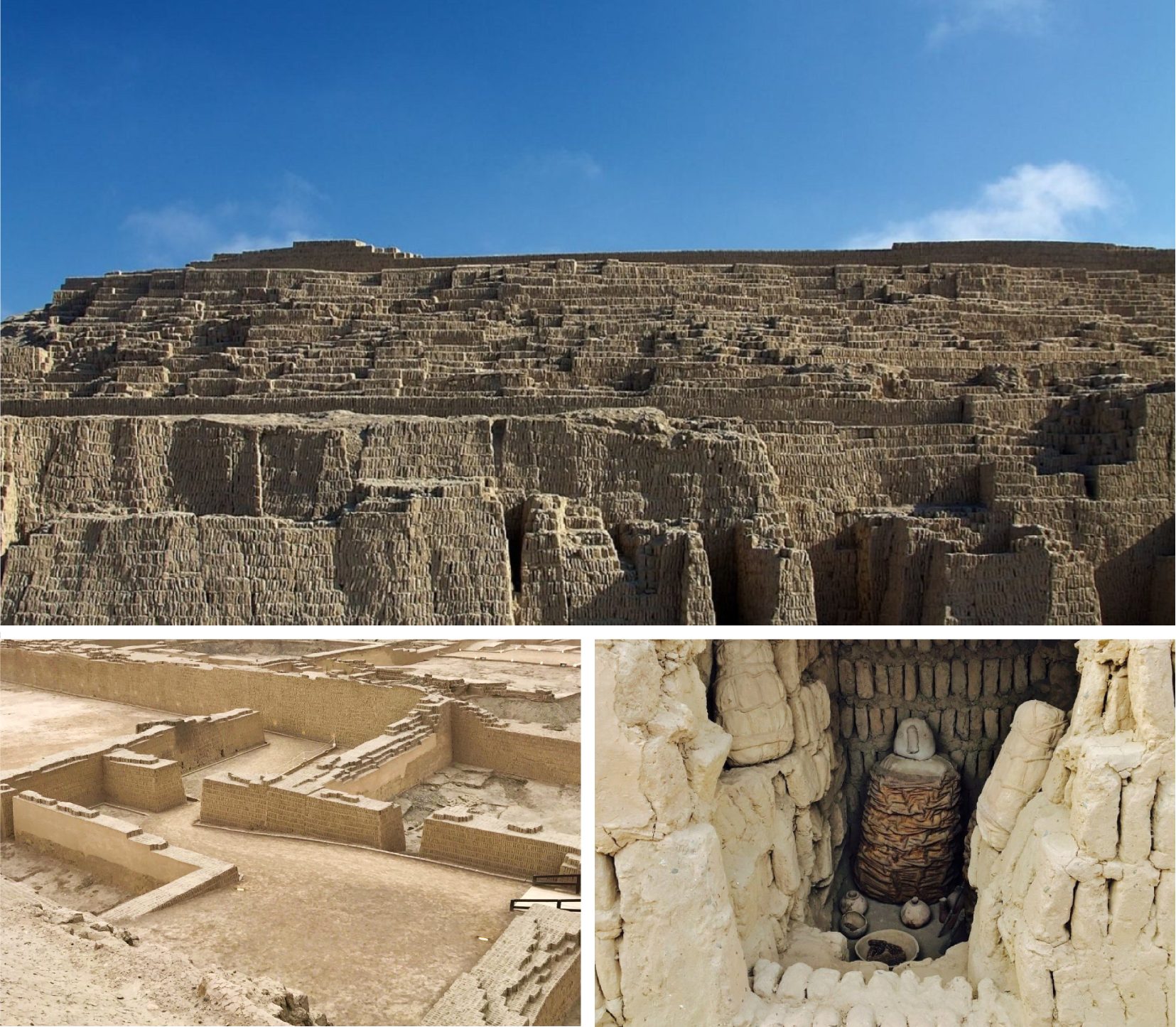 Pachacamac– Located a mere 25 miles south of Lima, Pachacamac was built by the Ichma people in 700 AD and was occupied by approximately 20,000 people. Located in a desert region, the site contains 17 pyramids, a cemetery, several plazas, temples, and palaces, as well as a multi-colored fresco. The site was used for the worship of the creator god, Pacha Kamaq. Structures include the House of Chosen Women, a monumental granary, a ritual cemetery, and the Temple of the Sun. The onsite museum houses artifacts from four cultures, including the Ichma, Wari, Lima, and Inca people. The site can be visited on a day trip from Lima. 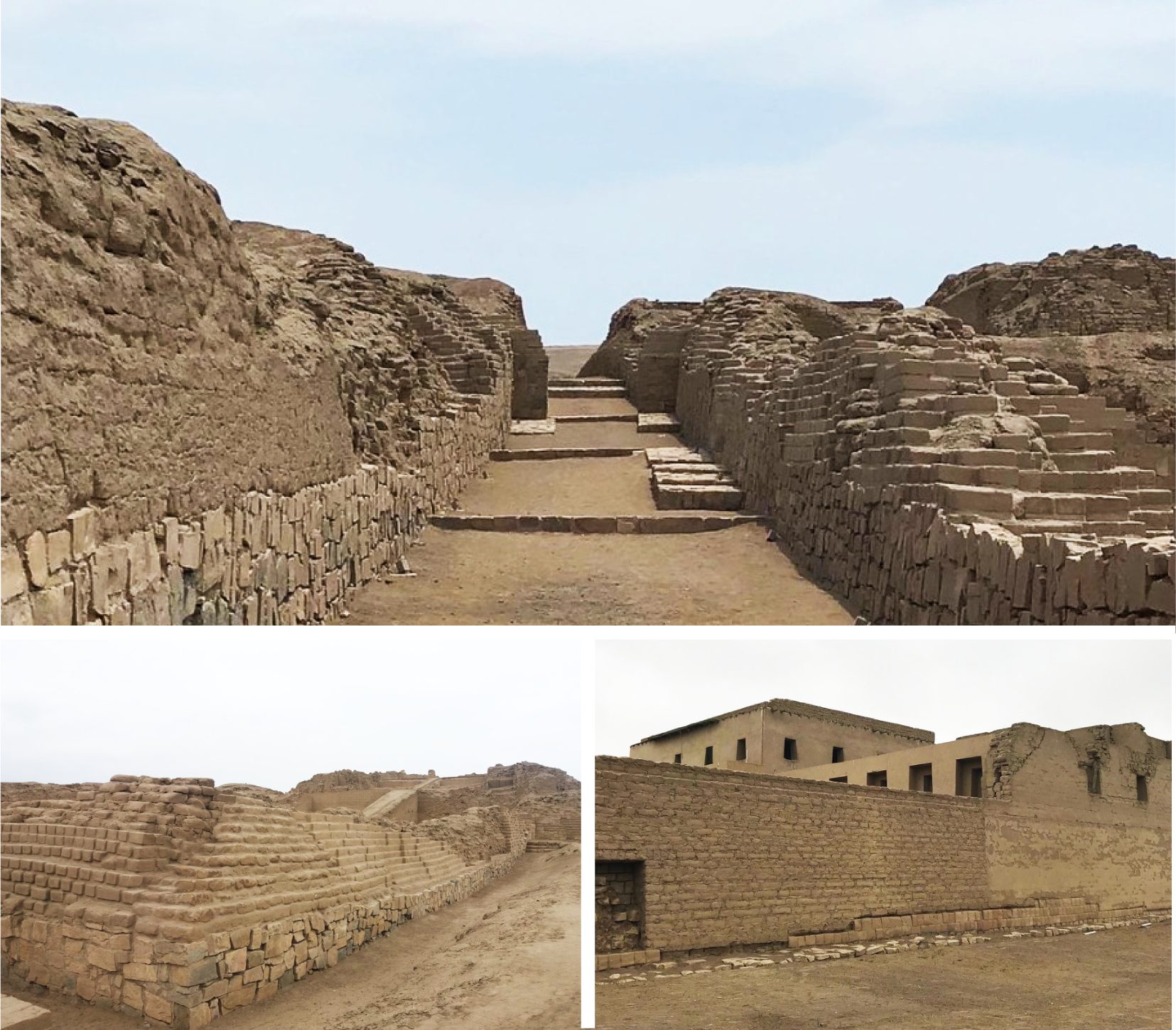 Chavín de Huantar– This site is among the oldest pre-Columbian archaeological sites in Peru, located 160 miles north of Lima. It was built by the Chavín, which was probably Peru’s oldest culture, dating back to at least 1300 BC. The site has two flat-roofed pyramidal temples and a large circular plaza: one of the subterranean tunnels underneath the main pyramid contains the Lanzon de Chavín, a 13-foot statue of the Chavín culture’s main deity. Adventurous folks will enjoy exploring both the aboveground and underground portions of the complex. 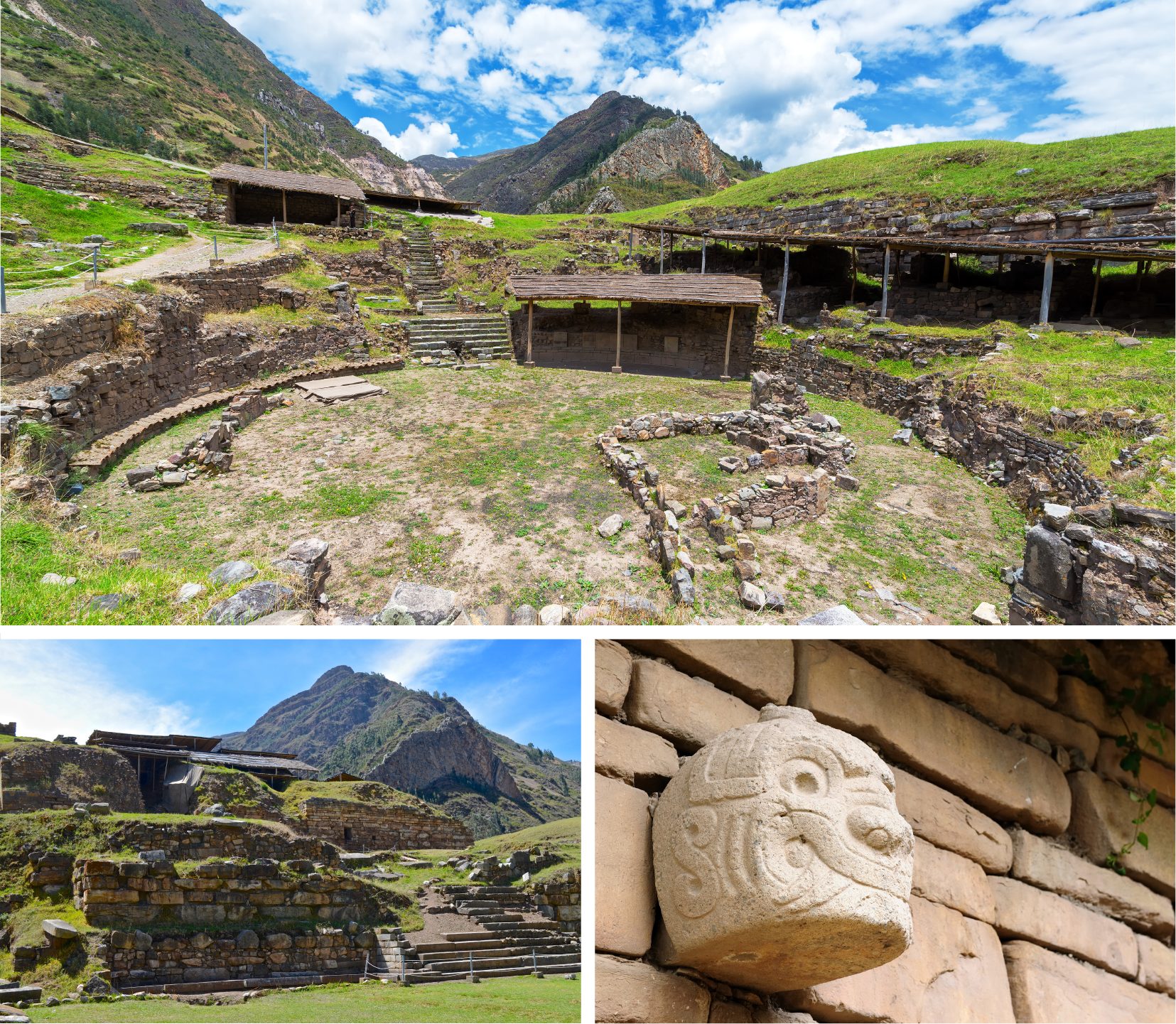 Choquequirao – Labeled a “sister site” to Machu Picchu, the much less visited Choquequirao is less accessible, and far more secluded than Machu Picchu, making it more desirable for folks looking for a quieter alternative to the more famous ruin. Only recently explored and excavated, Choquequirao, meaning Golden Cradle, was built around the same time as Machu Picchu and covers around six square km of terrain. As an alternative to the Inca Trail, the four-day trek to Choquequirao offers a chance to observe several ecosystems and types of terrain, with the end goal, the ruin itself, a truly remote wilderness complex, little visited by masses of tourists. An interesting feature of the ruins is the white stone llamas that are carved into the stone terraces: other animal-shaped terraces in the complex are thought to represent guinea pigs. 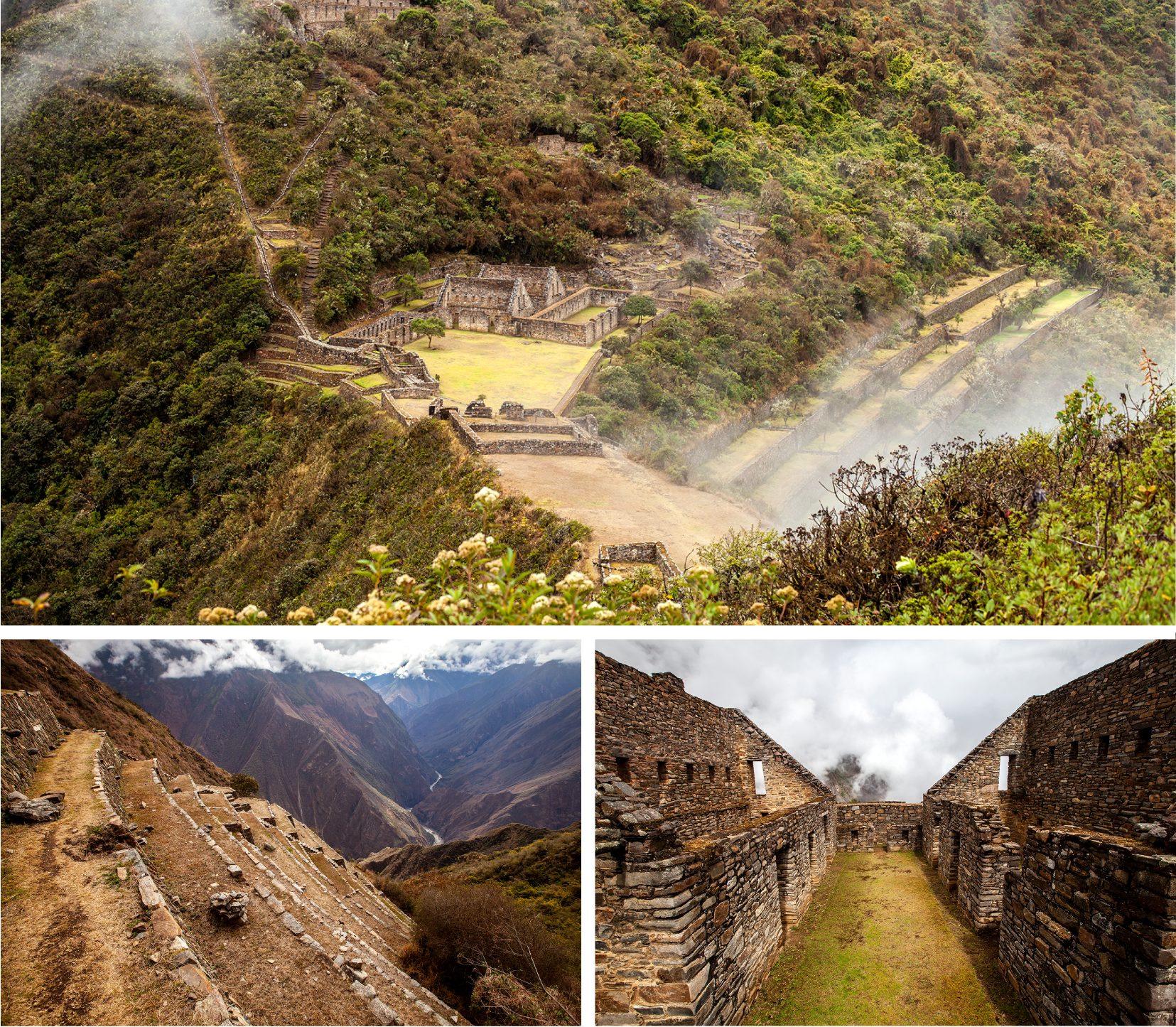 Ollantaytambo– These must-see ruins are easily visited on the way to Machu Picchu, as it is the town of Ollantaytambo that the Machu Picchu train leaves from. This magnificent ruin rises above the village of Ollantaytambo. It consists of 200 stone steps leading up to a series of ascending platforms, which, as you climb, offer increasingly imposing views of the opposite slopes, complete with chullpas, or ancient granaries, and the village below. It was at this fortress that the Incans, albeit briefly, defeated the Spanish conquerors in the mid-fifteenth century. 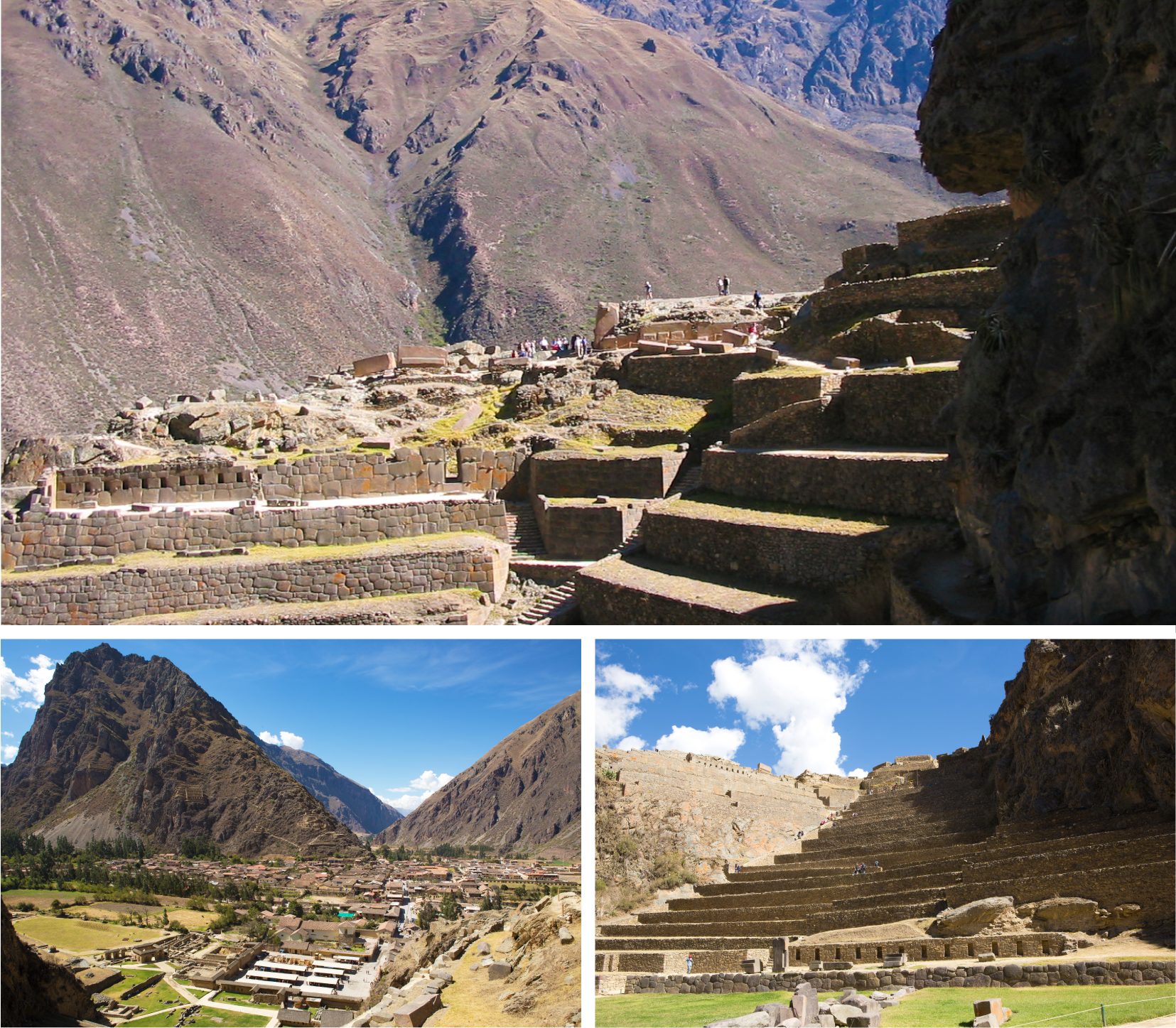 Wari Archaeological Complex – This sprawling site is located 153 miles from Cusco, outside of Ayacucho, and is one of the largest ancient urban centers uncovered in Peru. The site spans 988 acres and reflects the advanced engineering and city-planning skills of the pre-Inca Wari culture. As may as 40,000 people may have lived here at one time. The site boasts underground galleries, mausoleums complete with mummified remains, and astronomical tables that are still being investigated by archaeologists. 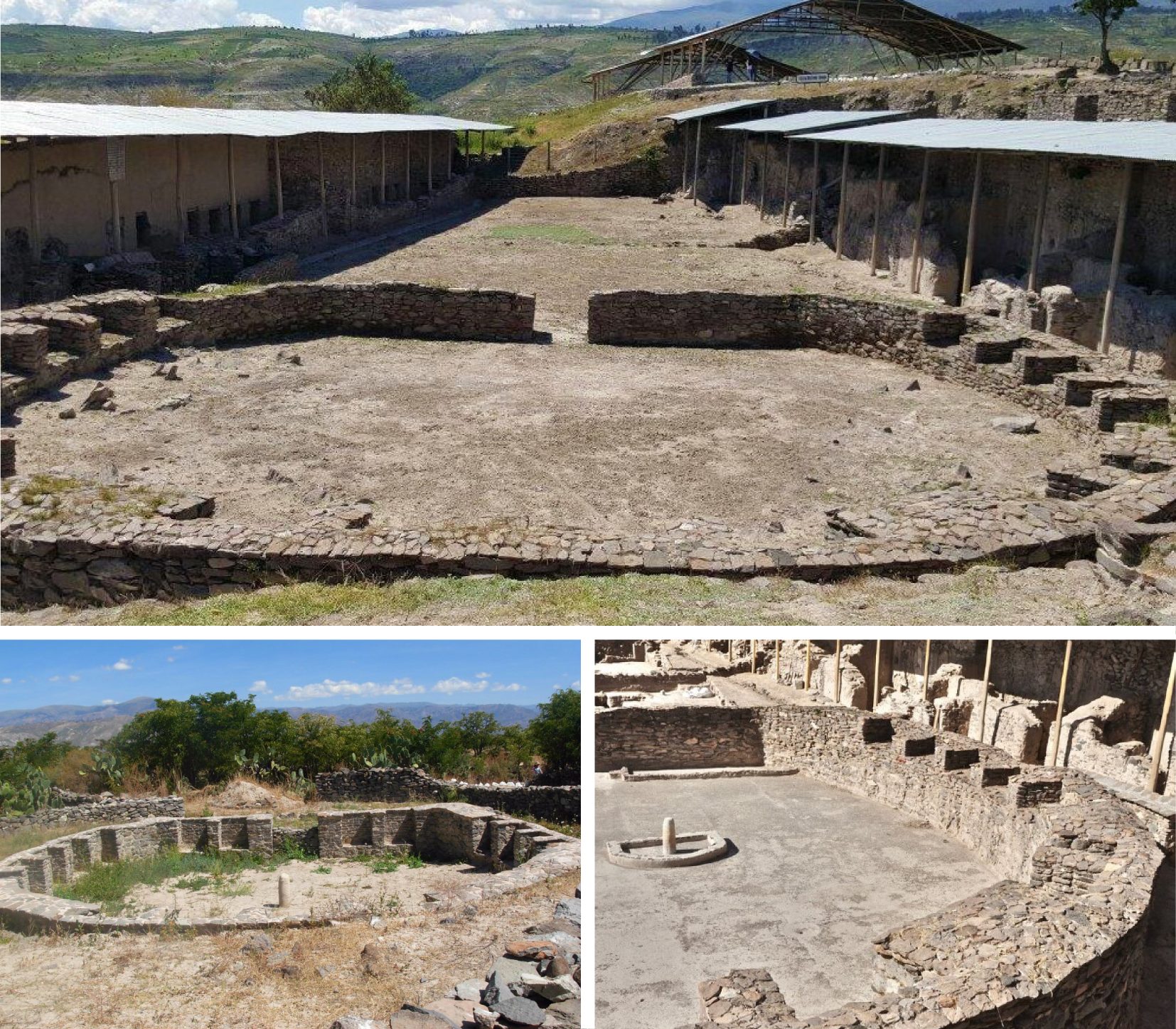 Adding some or all of these ancient sites to your Peru journey will increase your wonder and awe at the ancient cultures that thrived in fascinating Peru, and give you even more reasons to visit Peru for a second or even a third time. 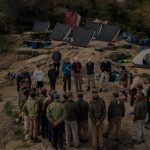 What to Know About Our Porters’ Work Conditions and How We Compensate and Support Them
14 February, 2020Explorandes